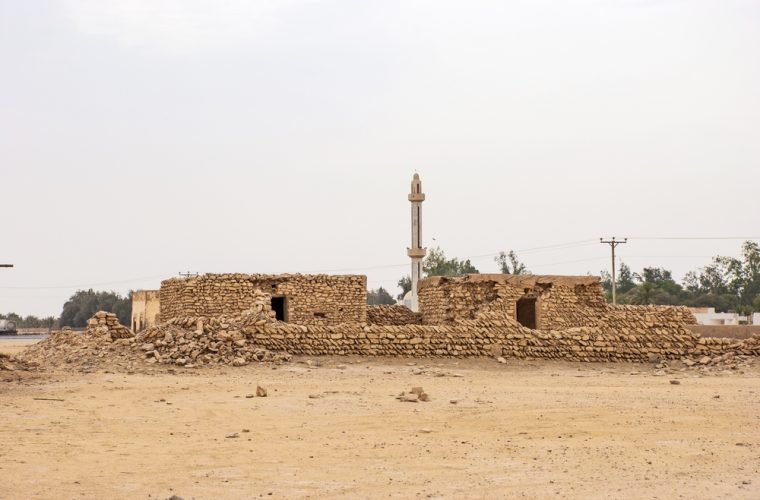 Evidence of early habitation in Qatar that can be traced as far back as to the 4th century BC appeared in many artifacts such as inscriptions, rock carvings, flint spearheads and examples of pottery which were all uncovered by the Danish (1965), the British (1973) and the French (1976) expeditions. Researchers knew al-Wasil hills since 1957 as an important site of Stone Age archeology. About 200 archeological sites of the prehistoric age were discovered during the eight years of the work of the Danish expedition from 1965 to 1975. Several sites of various periods in the Stone Age were discovered to the east of Um Bab. Other sites were found in the southernmost border near Soudanthil. An important site for the manufacture of flint tools, which probably goes back to the Mesolithic Stone Age, was discovered at Umm Tag to the south west of Dukhan; and new sites were discovered to the south east of Mesaieed. The archeological surveys revealed that the Ubaid civilization, which flourished in southern Iraq and the northern parts of the Arabian Gulf, had also reached the Qatar peninsula.

In the 5th century BC, the Greek historian Herodotus referred to the seafaring canaanites as the original inhabitants of Qatar. Further, the geographer Ptolemy showed in his map of the Arab world 'gatara' as believed to refer to the Qatari town of Zubarah, which has acquired the fame of being one of the most important trading ports in the gulf region at the time.

Qatar in the 20th Century

Qatar continued to maintain its ties with the state of the Ottoman Islamic Khalifate and recognized the khalifate's nominal sovereignty until early in the 20th century in spite of the fact that the Ottoman rule in the Gulf region and the Arabian Peninsula was gradually weakened. In those circumstances Qatar chose not to commit itself to any protection arrangements other than the 1868 treaty, which Sheikh Mohammed Bin Thani had signed with Britain. In 1916 Britain was able to conclude with Qatar a protection treaty that was finally ratified on the 23 of March 1918 after Sheikh Abdullah Bin jassim had signed the original and translated versions. Britain then moved to the stage of its physical presence in Qatar after the ratification of the amended treaty in 1935. The amended version ensured the cancellation of the 'frozen' articles dealing with the political British representation in Qatar in the old treaty, and provided for the establishment of postal and telegraphic services, airports and other facilities, notwithstanding that no British political representative had come to Doha until 1939.

Oil exploration operations took about 14 years (1935 - 1949), and in spite of the first signs of success at Dukhan field towards the end of 1939, operations had to stop for 4 years because of the Second World War. In 1949 oil started to flow in commercial amounts, and in December in the same year the first ship left the shores of Qatar bearing a consignment of crude oil.

Before that, a 10-year period of hardship, which was marked with food shortages and steep increase in the price of commodities, hit the country from 1939 to 1949 in the aftermath of the Second World War and the sharp fall in revenues from pearling. Despite the fact that Qatar was not independent yet, it tried since the 1960s to engage in some international activity by joining some technical UN organizations such as the UNESCO and the World Health Organization. It also participated in the conferences of oil producing countries and the 14th session of the Arab League's cultural committee, held in Cairo on the 21st of January 1961.

After Britain had decided to withdraw from the entire region in 1968, a decree-law No (1 1) for 1969 was issued to establish a department for foreign affairs, which had formed the nucleus of the present Ministry of Foreign Affairs..

The first Qatari constitution, which was issued as a provisional basic statute in 1970, stipulated, by decree No (35) issued on 29th May 1970, the formation of the first Council of Ministers in the history of Qatar. Several laws started to flow thereafter, outlining the responsibilities of ministers and jurisdiction of ministries and government departments in line with the basic statute.

The first meeting of the first Council of Ministers in Qatar was held in the 3rd June 1970, with 10 portfolios. Independence was proclaimed on 3rd September 1971.