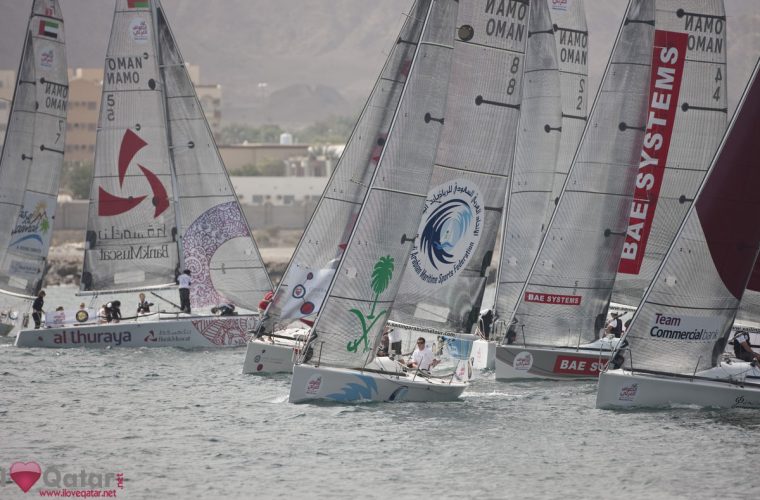 Time:
The only PAN-GCC offshore Sailing Race. The Tour were on the water off the coast of Qatar , The Pearl Doha for the first of three in-port races to take place during the 15 day race between Bahrain and Muscat. After a windless opening day to EFG Bank Sailing Arabia – The Tour, sailing conditions were a perfect at the Doha’s magnificent development, The Pearl. 10-15 knots with flat water for the three double lap windward-leeward courses, held against the Qatari skyscraper-lined backdrop.

The route for the racing is below. You can catch the glimpse of the them across the shore as per this route in your city.

2012 Winner of SATT – Daniel Souben Skipper -Team Courrier Dunkerque (France) quotes" I can speak for majority of my colleagues, friends and opponents when I say, that sailing Arabia- The Tour provided a magnificent opportunity to visit 7 venues, 4 countries and over 700 Nautical miles of varied and ever more beautiful landscape."

David Graham, Chief Executive Officer of Oman Sai l mentioned " Focused on the skill of the competitors, the wonderful sailing conditions and the development of sailing as a whole throughout the Gulf region, we look forward to a wonderful two weeks of intense competition on the water, and building lasting friendships in port – and the start of a new chapter in the rich traditions of sailing in this unique environment."


So ILQ connected with also a woman's team , the first ever-all female crew headed by British yachtswoman Dee Caffari, being first woman to have sailed single-handed and non-stop around the world in both directions and the only woman to have sailed non-stop around the world three times.Dee successfully completed the gruelling Vendée Globe Race in 2009, crossing the finish line in 6th place out of an original fleet of 30 competitors. The crew members for AL-THURAYA BANK MUSCAT were Sarah Hornby , Elizabeth Bayliss, Katherine Pettibone , Basma Al Nofali , Raiya Al Habsi ,Rajaa Al Uwaisi, Ibtisam Al Salmi , Tahira Al Yahyaee , Asrar Al Ajmi.

Another team we connected was "Team Renaissance" skipper Oman’s Mohsin Al Busaidi, who is the first Arab sailor to circumnavigate the globe non-stop in 2009, taking just 76 days, 1 hour, 12 minutes and 42 seconds to make the trip.

This year 2013 SATT sponsor is EFG Bank,of Sailing Arabia – The Tour 2013, is a private bank with an international presence in 30 countries. EFG Bank has a proud history of sports sponsorship, including programmes for sailing in the Principality of Monaco – the EFG Bank Sailing Academy. Offering the highest class of private banking services for some of the world’s most demanding high net worth individuals, EFG Bank provides a unique level of relationship with their clients, eradicating the inconveniences of financial management. Oman Sail is proud to include EFG Bank as title sponsor of Sailing Arabia – The Tour 2013.

Which Boat they are gonna race in? Check the same below for specifications:

What do all women sailors have to say about sailing? the shout out from the sailors too. Watch them on our Youtube channel at youtube.com/iluvqatar !