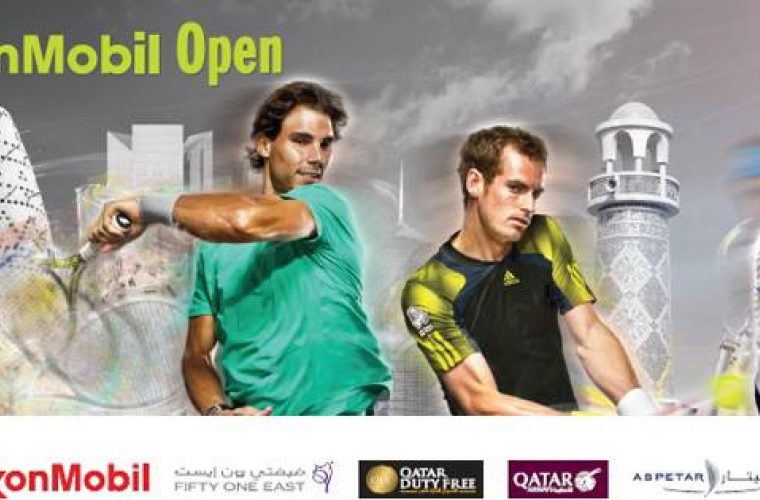 The Qatar Tennis Federation is proud to announce a stellar field of participants for the upcoming Qatar ExxonMobil Open 2014. For the 22nd consecutive year, Doha will be the starting point for 32 players on the ATP World Tour as they begin their 2014 season.

Leading the field is world No. 1 from Spain, Rafael Nadal. Nadal is returning to Doha after a 2013 season that saw him win 10 titles, including an eighth French Open and a second US Open. This is Nadal’s sixth appearance in the Qatari capital with his best result being a finals appearance in 2010.

Spain’s David Ferrer, the world No. 3, had an outstanding 2013 season winning two titles (Buenos Aires and Auckland) and reaching seven other finals, including at ATP Masters 1000 events in Paris and Miami.

World No. 4, Andy Murray, of Great Britain makes a return to Doha where he is a two-time champion, having won in 2008 and 2009. Since then, he has won the gold medal at the 2012 London Olympics, the 2012 US Open title and 2013 Wimbledon, becoming the first British man to win Wimbledon since Fred Perry in 1936.

Tomas Berdych, world No. 7, from Czech Republic, is making his Doha debut at this year’s event. The winner of eight career titles, he reached three finals in 2013 – Bangkok, Dubai and Marseille.

Defending champion and world No. 9, Richard Gasquet ofFrance, returns to see if he can win another Doha title. In 2013, after hisvictory in Qatar, Gasquet went on to win two more titles in Montpellier andMoscow.

Frenchman Gael Monfils is making his seventh appearance in Doha. He has reached the final twice, losing to countryman Jo-Wilfried Tsonga in 2012 and Switzerland’s Roger Federer in 2006.

Tournament Director, Karim Alami, spoke of this year’s field, “We are incredibly honored to have another year with players of the highest caliber coming to the Qatar ExxonMobil Open. The week in Doha kicks off the ATP World Tour season and these players are looking to hit the courts fresh from their end of season break. Rafael Nadal returns to Doha as world No. 1. Andy Murray looks to tie Federer’s record of three Doha titles and Richard Gasquet is looking to defend his title from last year. David Ferrer is one of the toughest competitors out there and Thomas Berdych is coming to Doha for the first time. Gael Monfils is always a fan favorite.”

Tickets for the QatarExxonMobilOpen2014 can now be purchased in the malls Villaggio Mall, City Center Doha, Landmark, Lagoona, and the Khalifa International Tennis & Squash Complex