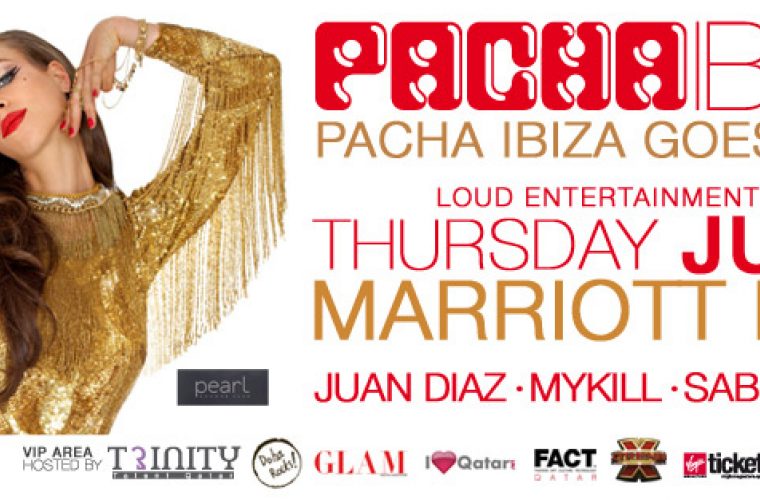 Doha’s very own Marriott Beach will be the setting for the very first PACHA beachside event, which promises to be the most exclusive beach party of the year. Pacha is an event franchise with headquarters in Ibiza, Spain. The first Pacha club was opened in sites outside Barcelona in 1967. The Ibiza club, located in Ibiza Town, is the best-known venue today. In a 2012 DJ Magazine poll of the world’s 100 best nightclubs, Pacha rated third. Their resident DJ’s are arguably the best in the world which includes big names like Bob Sinclar, David Guetta, Swedish house Mafia and Benny Benassi to name but a few!

On Thursday June 6th, the Chic and Trendy crowd of Doha will be sipping cocktails and premium drinks, while jacking their bodies on the beach and watching the sun go down as it fades into the oblivion. Expect everything from an elegantly decorated VIP area hosted by Trinity Talent Qatar with white cloth tables and hostess service, to the PACHA’s very own resident dancers strutting their stuff throughout the night. To tip you over the edge, the DJs manipulating the tables and bringing the crowd to their knees will be none other than PACHA IBIZA resident – Juan Diaz, Dubai’s number 1 DJ – Sabrina Terrence and Malta’s biggest export -Mykill.

PACHA WOULD TOUR in Doha is brought to you by LOUD Entertainment – The people behind LOUD are responsible for some of the most exclusive events and beach parties Europe has ever seen. We have organized gigs in Malta, Ibiza, Italy, Spain, Germany and also outside of Europe such as Bali, New York and Las Vegas. We are now bringing our talent and expertise to Doha and can promise a wide variety of special events and acts to come.

For more information or table and ticket reservations call 66552596