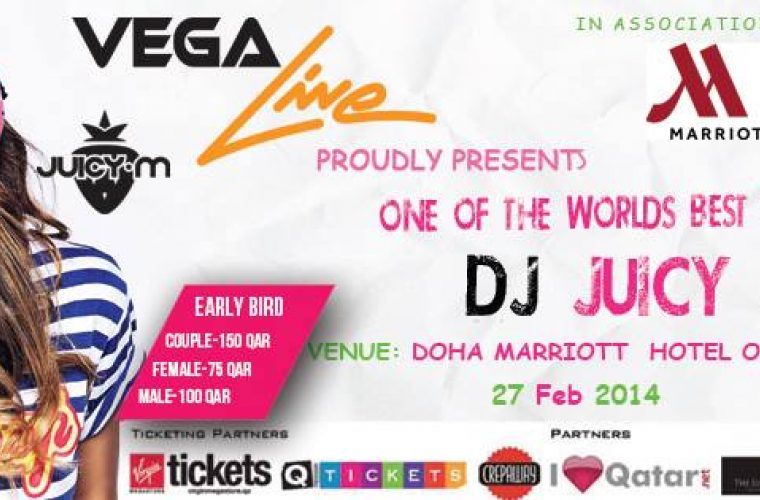 One of the world's most famous female DJs is coming to Qatar!

She'll be performing at the Doha Marriott Beachside and you'll be fist bumping the sky.

Being one of the future megastars, she’s very successful and extremely popular female DJ in the global electronic music scene. As a true embodiment of energy on the dance floor with her incredibly unique mix of music, skills and beauty—she quickly earned a name for herself by showcasing her explosive mixes on her video series “Mixing on 4 CDJs” which put her into the digital spotlight on Facebook and Twitter with millions of views — taking her to first place in Billboard’s “Next Big Sound” chart in August 2013 representing the fastest accelerating artists on the platforms.

After performing in more than 50 countries on 4 continents for the last two years – she soon found herself on stage with Afrojack, The Backstreet Boys, Black Eyed Peas, Dragonette, Jay Sean, Skrillex to name a few.
In 2007, Juicy M began her career as a TV host on OTV music channel and resident DJ in fashionable nightclubs like Orangerea Supper Club, Patipa and Matrix in Ukraine. The following year, she was the headlining act of the Fashion TV tour. Having participated in the DMC World Eliminations in Ukraine and World Technical DJ Championship in Dubai, she was named “Best Female DJ of the Year” at the ProDJ Awards in 2010.

Apart from her soaring DJ career, Juicy M has modeled internationally for acclaimed magazines like FHM and Maxim—appearing on the covers of XXL, Guts and Timeout.

Since May 2013 Juicy M started her weekly radio show called JuicyLand which reached thousands of followers and broadcasted in 10 countries including U.S., Canada and Mexico with over 20 web streams globally. Her biggest and most recent remix track with Emzy “Watch Out for This” by Major Lazer has received massive support by heavyweight artists Bob Sinclair, Calvin Harris, La Fuente and Laidback Luke