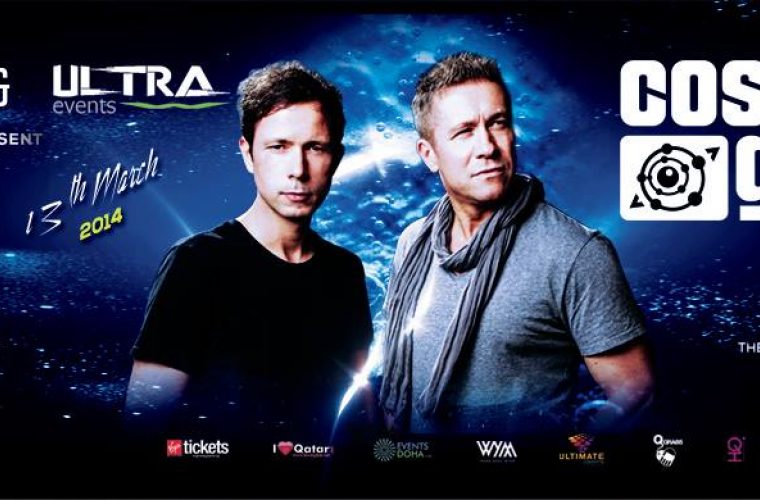 Be Ready to witness the DJs that have performed the biggest acts around the globe!

Be Ready to leave the world behind and dance with thousands of clubbers!

Be Ready to experience an energetic musical journey in a unique first time ever venue and world class production!

From A STATE OF TRANCE stage all the way to DOHA!

Straight from Germany, the progressive trance duo Cosmic Gate is bound to rock your night!

The perfect union of musical minds, one karmic meeting in a recording studio resulted in Cosmic Gate’s Big Bang moment. It set brothers-in-sound Nic Chagall and Bossi on a rapidly expanding path - one that’s seen them evolve into Germany’s most consistently successful electronic music duo. It’s catapulted their Cosmological productions to the highest reaches of the official sales charts and seen them remix the compositions of revered Hollywood composers such as ‘Avatar’s James Horner. Through their atomic on-stage synergy, Nic & Bossi have created countless unforgettable dance floor nights. They’ve sold out arenas & festival halls, conquered EDM capitals, hosted their own stages at major festivals and 10 years into their career became the highest climbers on DJ Mag’s Top 100 chart. Driven by their hugely received albums, club-busting singles (incl. ‘Not Enough Time’, ‘Body of Conflict’ and ‘Over The Rainbow’) and scene-defining classics ‘Be Your Sound’, ‘Fire Wire’ and ‘Exploration of Space’, their place in EDM’s hall of fame has long since been secured.

►►►►►► Tiësto (About the smash single 'Not Enough Time): "a great and solid vocal trancer that touches all your musical senses!"

►►►►►► Armin Van Buuren: "The new Cosmic Gate album is one of the most anticipated releases of this year. They are on the forefront of the dance music sound of the moment...