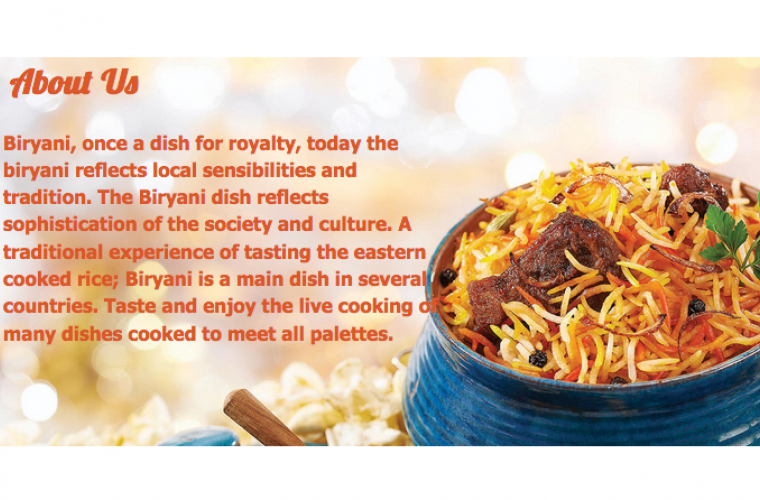 Foodies and food adventurers are in for a great treat as skilled restaurateurs and chefs from the south Asian region converge for the most awaited Biryani Festival at the Hotel Park – Sheraton from February 7-10, 2018.

The four-day mouth-watering event, which is organised by Four and One, is the first of its kind in Qatar and it is set to arouse and excite the gastronomic juices of the expected thousands of participants from 5pm to 9pm daily.

More than 45 exhibitors will be showcasing their skills as over 100 types of biryani, including Mughlai, Lucknow gosht, Kashmiri vegetable, mussels, prawns, hara macchi, egg, harkmas (beef), Malabar chicken, Mattanjery chicken, Kayikka’s beef, Thalassery mutton, the traditional Afgani and Irani and others will be on offer during the highly anticipated festival.

The family orientated event, partnered by Talabat, Zamatoe, Urban Point and QTouch Media & Events, will cater for vegetarian and non-vegetarian alike in addition to Biryani lovers.

The history of Biryani is as fascinating as its taste and aroma. Biryani, once connected, with royalty is a dish that wraps the very essence of its rich and long history within its layers of pleasure. The Mughlai cuisine that India is famous for was developed in the 15th century during the reign of the Mughals. The Mughals who had rich taste buds, raised cooking in India to an art form, introducing several recipes to the sub continent that included biryani, pilaf, and kebabs among others.

The word “biryani” comes from the Persian word “birian” which means “fried before cooking.” One could conclude that the biryani originated in Persia (modern day Iran).

Whatever the origin biryani remains a favorite across the world, it transcends man-made frontiers and has swayed both vegetarians and non-vegetarians with its tantalising taste and aroma.