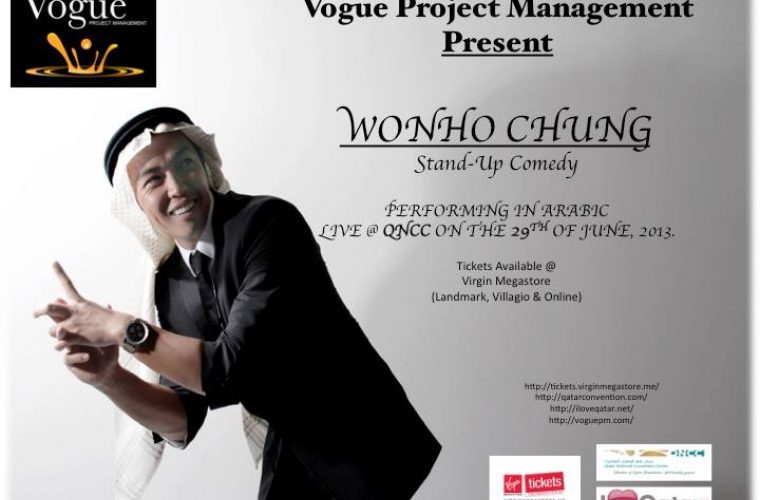 Description:
WONHO CHUNG Stand-Up Comedy in Arabic! on the 29th of June @ QNCC, Tickets will be at Virgin soon

Wonho Chung was born in Jeddah, Saudi Arabia on October 22, 1981, into a musical and rather different family. His father is a prominent physiotherapist from South Korea and his mother is from Vietnam. Although he grew up in an Asian household, Chung’s upbringing was completely Arab, having been brought up in Amman, Jordan. He graduated from the Applied Science University in 2004, and then moved to Dubai during the same year to pursue a career in media.

Chung’s comedy career began in November 2007 when Showtime Arabia approached him to join the AXIS OF EVIL comedy tour as the “Korean” they were looking for. They originally wanted a North Korean to complete the Axis, but instead settled for a South Korean, who speaks Arabic. He toured with the Axis of Evil comedy tour for a month, performing in 27 shows in front of 20,000 people collectively, in Jordan, Egypt, Kuwait, Lebanon and Dubai. Chung’s first TV appearance was in ShowComedy’s follow-up mini-series to the Axis of Evil comedy tour in the Middle East, a nine episode reality documentary aptly dubbed “3 guys and Wonho”, which won a golden trophy at the 2008 Promax BDA awards ceremony held in Dubai.
Stand up comedy lovers were treated to another dosage of comedy when Showtime put together “Friday Night Live”, which Chung hosted alongside his Axis co-star, Aron Kader. ‘Friday Night Live” was then the region’s biggest stand up comedy show, with nine international comedians sharing the stage and pulling in an audience of 2,500 people for a one night stand up comedy extravaganza, under the theme “minorities rule”.
Chung also starred alongside international comedians; Sugar Sammy, Ronnie Khalil and Ron Josol in Showtime’s third foray into stand-up comedy when Friday Night Live – New World Order (Friday Night Live 2) took place at the Dubai Community Theater at Mall of the Emirates. The show was well received by the audience and the subsequent eponymous TV special was a hit among audiences across Arab countries.

Recently, Wonho Chung was special guest at Arab Idol too.

Get your tickets at
Virgin Megastore (Villagio, Landmark + online)