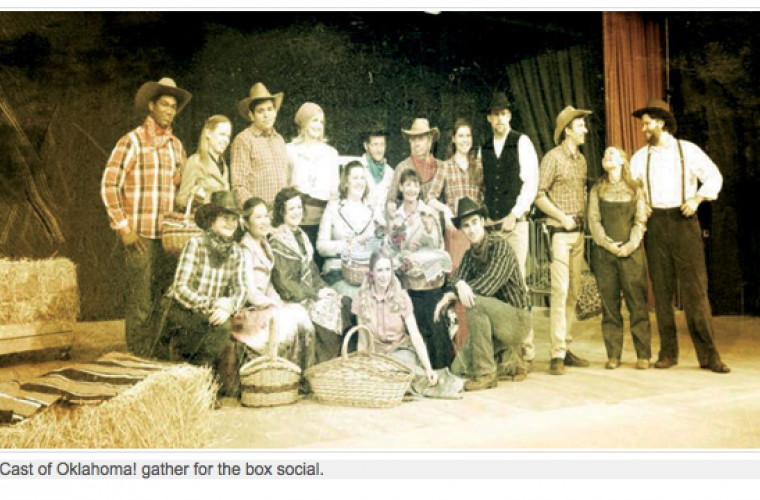 
The award-winning musical comedy Oklahoma! is coming to Doha and will be shown at the Doha British School Theatre from February 28 to March 9.
Tickets are available at The One in Villaggio and Landmark Mall.
The director, Angela Walton, has brought numerous other musicals to the Doha stage in the past, including Grease, Miss Saigon, Annie, and last year’s Wizard of Oz.
Vocal and orchestral direction under the baton of Miss Brita Fray, who is the conductor of the Doha Community Orchestra, has once again joined forces with Senter Stage Musicals.
The show opens with the all-time favourite song “Oh What a Beautiful Morning” sung by Nick Mitchell, who we will all remember as the lead Chris in Miss Saigon. Other great songs are “Surrey with a Fringe on the Top” and the finale song “Oklahoma”.
Kristina Cheffins and Lauren Durrant, the two choreographers for this production, have pulled out all the stops, by teaching a quick fast cowboy dance to the cast, which will have you clapping in your seats.
Authentic cowboy ropes, hats and costumes purchased by Jimmy Leeper in the USA, add just the right essence to the costumes.
Oklahoma! tells the story of cowboy Curly McLain (Nick Mitchell) and his romance with farm girl Laurey Williams (Stephanie Gravelle). Curly must fight for her affections with her hired hand Jud Fry (Brandon Ballara). A secondary romance concerns cowboy Will Parker (David Pearson) and his comedic attempts to get the flirtatious Ado Annie (Lauren Durrant) to marry him.
Other wonderfully amusing characters in Oklahoma! include giggly Gertie Cummings (Jennifer Stokes) who just wants to get married; peddler Ali Hakim (Geoff Heney) who most definitely does not want to get married; Andrew Carnes (Phillip Mitchell) who uses his shotgun to encourage marriages; and the tough-as-nails big-hearted Aunt Eller (Michele Hussey), who tries to keep a tight rein on them all.
The original Broadway production of Oklahoma! opened on March 31, 1943. It was a box-office smash and ran for an unprecedented 2,243 performances. It later enjoyed award-winning revivals, national tours, foreign productions and an Academy Award-winning 1955 film adaptation. It was the first musical Rodgers and Hammerstein wrote together.
The cast of “Oklahoma” invite you to join them at one of their performances, to sing along, clap, and have two hours of fun whilst they entertain you.
This production could not have been possible without the support of our sponsors, Commercial Bank, Exxon Mobil, Cloudmedia, DHL, and Spacemakers.
All proceeds from this production will go towards The Performing Arts Department at the Doha British School, where this production is being staged.
Date of the performances are: 7.30pm shows (February 28, March 1, 7 and 8) and the matinee 2.30pm (March 1, 2, 8 and 9).
Ticket prices are QR100 for the first four rows and QR75 for the tiered seating.
For further information contact [email protected]