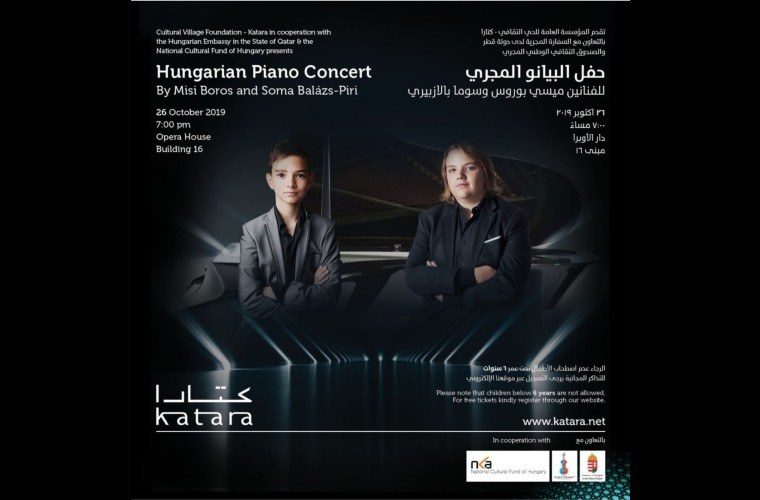 The Opera House of #Katara will host the Hungarian Piano Concert, by Misi Boros & Soma Balazs-Piri, in collaboration with the #Hungarian embassy in #Qatar and the National Cultural Fund of Hungary.
Free tickets (online registration required): www.Katara.net

They’ve already had plenty of concerts with VIRTUOSOS, such as in New York, Milan, Paris, Stockholm, Brussels, Zurich, Tokyo, Osaka, Islamabad, Beijing and Budapest. In Shenzhen, China 214 million people watched Asia Music Festival featuring the talent, Misi Boros. In Szeged, an audience of 6.000 people gave a standing ovation to Soma Balázs-Piri, after playing his piano piece as a guest performer at the concert of Placido Domingo, conducted by the Maestro himself.

VIRTUOSOS, as an idea, movement and organization works for the future of classical music. They shape their journey with the help of these talented musicians featured in this concert, along with many other talents discovered in the previous 5 seasons of the show. They are the new champions of classical music, with their innovative spirit and unique art. We celebrate a great moment of the history of VIRTUOSOS now, performing in Doha, Qatar for the first time, on the 26th of October at the Katara Opera House.

Registration is required on Katara's website. This event is brought to you by the National Cultural Fund of Hungary.

Misi was born in 2003. His talent was discovered early, as he started to play his own tunes on his brother’s piano at the age of 4. From the age of 8 Misi has won every national competition within his age group, a total of 11 Hungarian and numerous international competitions in Rome, Milan and Paris. At such young age, he had already given countless performances all around the world. His unique talent and charming personality has been acknowledged and complimented by conductors such as Plácido Domingo and Tamás Vásáry.

Soma Balazs-Piri was born in 2004. He has been studying the piano for 6 years only, his outstanding talent was discovered at the age of 9. No one else is a musician from his family, his parents were surprised when his prodigious talent emerged. Soma has won many Hungarian and international piano competitions over the last five years. His most recent concert was in his hometown, Szeged, where he was invited by Maestro Plácido Domingo, who was also conducting his performance.