Aiza Seguerra and Gloc 9 in Doha 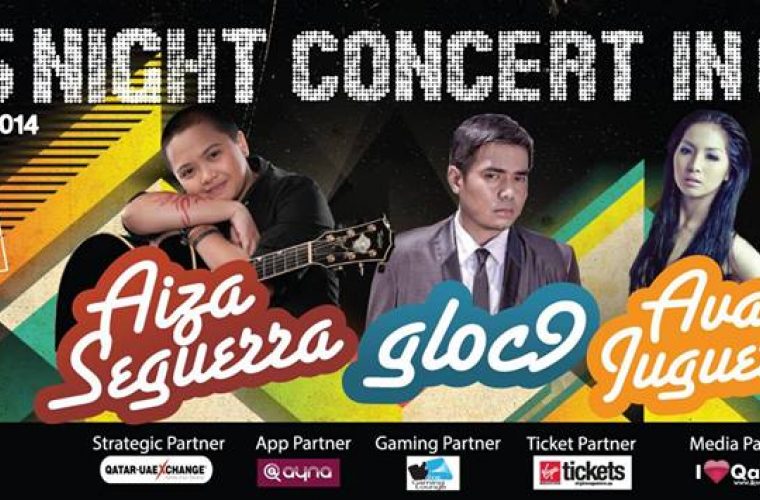 FILIPINO CONCERT TO START YOUR 2014 WITH A BANG!

The biggest Filipino Concert in History in Qatar:

The STARS NIGHT CONCERT will happen on January 31st 2014 with the Superstar Musician Aiza Seguerra and most famous and Award-Winning Filipino Rapper Gloc 9 for the first time in Qatar in an unique family friendly concert.

Stars Night Concert will happen at the new Amphitheater at the West End Park which can hold up to 15 000 Spectators.

AIZA SEGUERRA - is a Filipina actress, singer-songwriter and guitarist. After participating on Eat Bulaga's Little Miss Philippines 1987 she became a child star starring in several movies and TV shows and nowadays undisputed a superstar for the Filipino community worldwide.

GLOC 9 - Aristotle Pollisco, known by his stage name Gloc-9, is an Awit Award-winning Filipino rapper. His fast-flowing vocal style has made him one of the most successful hip-hop artists in the Philippines.

HAINA HUDDIN - A 16 year-old Filipina, the Doha's Singing Sensation, graduated in Philippine International School Qatar and brought the country a Gold medal and three other bronze medals after making it to the grand finals of the prestigious World Championships of the Performing Arts (WCOPA) in Hollywood, USA. She is also the Grand Champion in the recent ABC5's 2013 Talentadong Pinoy Middle East Worldwide.