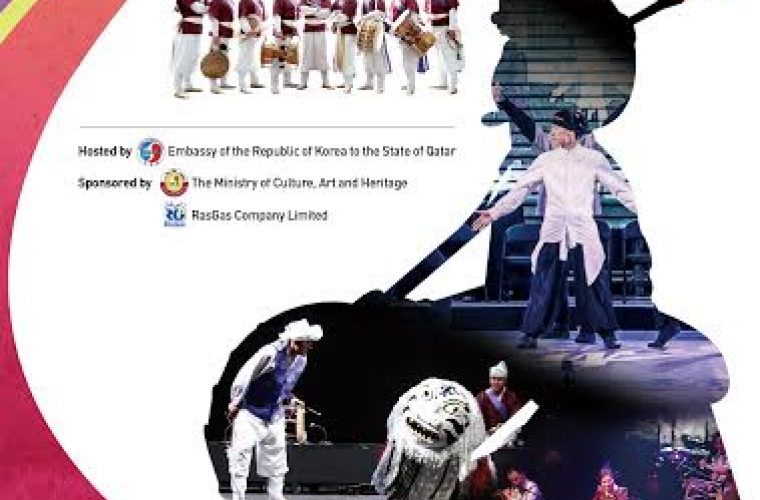 The Embassy of the Republic of Korea, in celebration of the 40th anniversary of establishing diplomatic relations between the Republic of Korea and the State of Qatar, is organizing various cultural events to showcase Korean traditions, arts and culture. These events will be spread over three days, starting from Thursday April 17 with a Korea-Qatar Culture Show at the Qatar National Convention Center, followed by Korean Kite Flying events on Friday, April 18 at the Museum of Islamic Art Park and on Saturday, April 19 at Katara. The events are being held in cooperation with the Ministry of Culture, Arts and Heritage of the State of Qatar, as well as RasGas, Katara Cultural Village Foundation and the Museum of Islamic Art.

The first event, the Korea-Qatar Culture Show will involve professional members from three modern and traditional music and dance teams, who are visiting Doha to enthrall the audience of all ages. They are “The Gwangdae” – a group of young artists who have been presenting their unique reinterpretation of traditional Korean performing arts, “Coreyah” – a folk music group which consists of four Korean traditional musicians, one guitarist, and one world percussionist, as well as “Morning of Owl” – an Internationally recognized B-boy performance team. Towards the end of the show, the three groups will team up and showcase a unique performance, combining modernity and tradition. Furthermore, the event will also feature a Qatari traditional folk music team “The Pearl”, which will be opening the event with an “Arda” performance and welcoming the Doha audience. The Korea-Qatar Culture Show is open for public, and will be held at Qatar National Convention Centre (QNCC), on Thursday, April 17, 2014 at 07:30 pm.

In addition to this, the embassy will also organize a Korean Kite Flying event, which will be held on two days; Friday, April 18 at Museum of Islamic Art (MIA) Park, and Saturday, April 19 at Katara, the Cultural Village Foundation. Huge kites of sizes 8x3 meters representing both countries will be brought in to Qatar from Korea by the Korean Kite Fliers Association (KOKFA), which will then display their kite flying skills over the Doha skies. The Kite flying demonstration will take place during the afternoon hours, and a kite making workshop for a limited number of people will also be held at 4:30 pm on both days.

All these events are open to the public, and the Embassy would like to cordially invite the citizens and residents in Qatar to attend and support these activities. The main aim of these events is to promote Korean culture to the Qatari public, encourage cultural exchange between Korea and Qatar, and thereby further enhance the bilateral relationships in the cultural field.