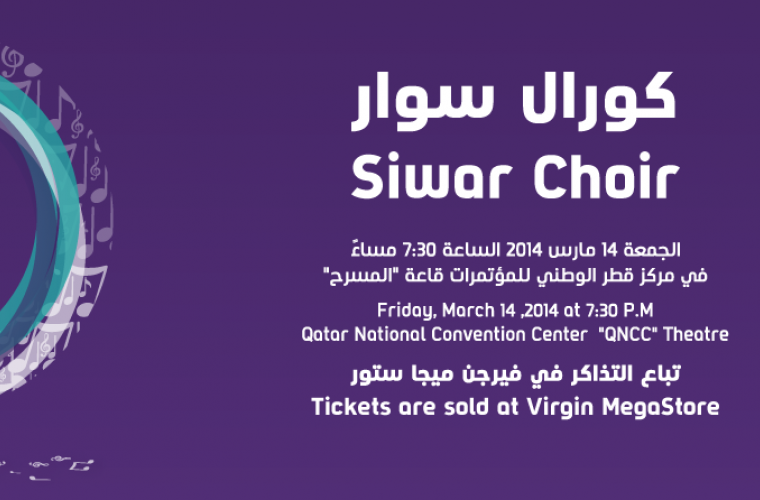 A live concert by a group of talented Arab Children with a special appearance of the World-renowned accordionist Richard Galliano.

Siwar Choir is holding its annual concert on Friday, 14 March 2014 at Qatar National Convention Center’s Theatre at 7:30 pm. Together we will enjoy a two-hour performance poetry and a variety of traditional Middle Eastern songs performed by 40 talented Arab children, accompanied with a special appearance of the world-renowned accordionistRichard Galliano. It will be a fantastic concert that combines Arab and Western music. Tickets are sold at Virgin Megasrtore at Landmark Mall and Villaggio Mall.

Siwar Choir is one of the most important cultural initiatives taken by Al-Jazeera Children’s Channel and it aims to revive the Arab music heritage as well as training Qatari and Arab children to improve their singing talents under the supervision of international musicians. Truly, Siwar Choir has presented a number of outstanding concerts that amused the audience through a wide range of excellent performance poetry and traditional songs.

In this regard, Mr. Saad Al-Hudaifi, Acting Executive General Manager, and Channels’ Director, stated, “This concert is a good example of Siwar Choir’s mission that aims to broaden Arab kids’ horizons by giving them the opportunity to realize the value of our rich Arab musical legacy. Certainly, this concert will give the Choir’s members the chance to express themselves and will reflect their trust in their own talents. What’s more, it will be a great chance for the participants and the audience to recognize the role of music in connecting the east and west”.

Nabih Elkhatib, Siwar Choirmaster, said, “The 2014 annual concert of Siwar Choir will showcase new talents alongside the current ones. Moreover, the concert will present a variety of songs and solo performances in addition to many other surprises”.