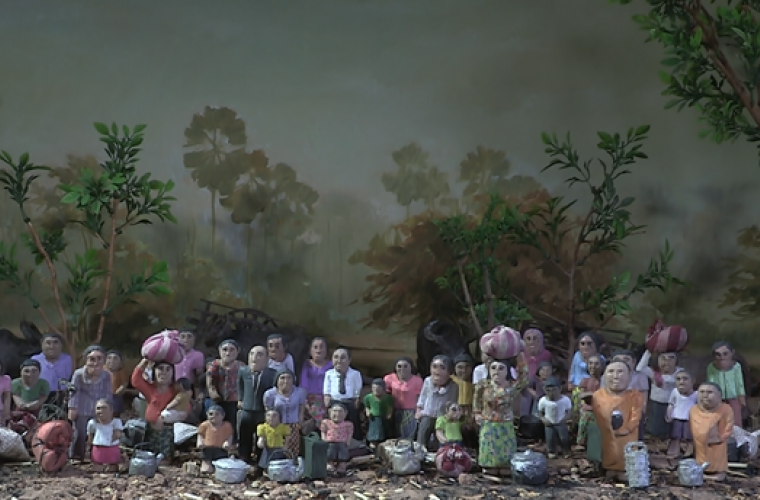 In 1975, the Khmer Rouge took Cambodia’s capital city of Phnom Penh. Within mere hours, the entire city was evacuated, its inhabitants forcibly transported via cattle car and wagon to the countryside in support of the repressive and violent regime’s bid to create a state built on the model of Stalinism and Maoism. This deportation is the ‘missing picture’ in Rithy Panh’s continuation of the project of recounting, documenting and accounting for the suffering visited upon the people of Cambodia during the years of the Cambodian genocide.

The film employs an almost astonishing device to describe the horrors of life for prisoners under the Khmer Rouge: painstakingly handcrafted miniature human figures that are used in tableaux of the various scenes the film descibes. Combined with archival footage of films from Cambodia’s golden age of filmmaking as well as documentary examples of the emptied capital city and forced labour in work camps, these toylike figures are disarming in that they are somehow endearing, even as they act out the gut-wrenching scenes of inhumanity the regime’s many victims were made to endure.

The common people under Pol Pot’s regime were reduced to nothing –as Panh suggests in the film, their choice was to be indoctrinated as revolutionaries or become fertiliser for rice. ‘The Missing Picture’ brilliantly revives the memory of those who disappeared, giving them an image that can be remembered, if not a voice.

EVENTS / ENTERTAINMENT
It's Time to Dance Through the Decades
Submit