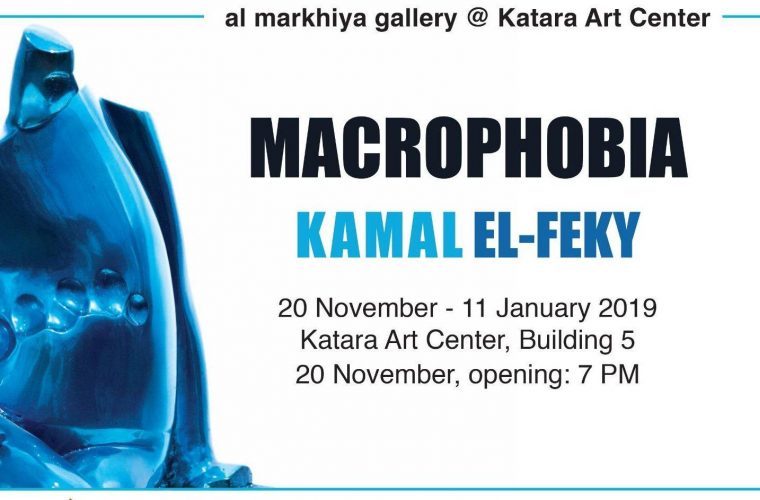 almarkhiya Gallery at Katara Art Center Invites you to attend the opening of Macrophobia exhibition by Egyptian artist Kamal Al-Feky on the 20th of November, 2018 at 7 PM.

Waiting is a state of apparent stability and anticipation, in order to come with a reaction within an indefinite time. It reflects many expectations during this state of waiting for something that is not certain to occur.

This is the academic definition of ''Waiting'' which does not necessarily describe the magnitude of suffering and conflicts experienced by man during that complex period of time.

During waiting, man becomes involved in a violent psychological struggle where he finds himself imprisoned in thoughts and memories that have been concentrated in his unconscious mind. On the other hand, waiting seems like the worst experience, where man is expected to be the victim of a futile existential state bound by a great conflict, and this leads him to be in a state of instability and internal dispersion. He struggles, does not know whether to wait, and so surrendering to that tough state of waiting, or to break the chains and revolt against any negative feeling or inner struggle that stems from this state of waiting.

''Macrophobia'', means the fear of long waits, tries to express the human condition at that time of waiting and man's struggle between hope and despair, desire and boredom. Moreover, ''Macrophobia'' represents a deconstruction of many ideas which link the wait to despair and absolute absurdity.

While Samuel Beckett expresses the idea of waiting, in his play "Waiting for Godot" in a futile way that is concluded by a miserable open ending that carries a sense of hopelessness, "Macrophobia" appears as a counter-movement and a rejection to the despair and inner repression that stem from the fear of long waits. The exhibition represents a complete state of waiting in all its stages; from the beginning to the declaration of disobedience to this difficult phenomenon. It tries to express a familiar but very disturbing and shocking state; this is the nature of waiting!