The food scene in Qatar is undeniably something to watch out for with all the year-round culinary festivals happening and restaurant franchises mushrooming from the four corners of Doha.

Besides the restaurants, cafes are also gaining considerable popularity among foodies in the country due to their open timings, relaxing setting, and accessibility.

The thing is, while cafeterias don't usually allow customers to stay longer after eating (because businesses like them need to provide seats for the next batch of people), cafes on the other hand are more than willing to accommodate you (and your workload) all day and night long.

They're basically like your office away from the office as most of them are equipped with power sockets to charge your devices, and ultra-fast WIFI connections for you to keep track of your emails.

The ILQ team one early weekend morning strolled around Doha to look for the perfect place to grab a cup of coffee and chill, and while most of the cafes that we stumbled upon are franchises, we also drove around a few traditional—and proud!—coffee shops along the way!

Disclaimer: The dollar signs that follow the names signify the cafe's affordability, based on Zomato.

Here are our Top 5 picks:

In the café’s interactive studio, all lights will be on you as you get the opportunity to be a news presenter using state-of-the-art equipment. Your moment in front of the cameras will be recorded and handed to you to take home. Please remember to share your experience with the AJ Media Cafe team on social media using the hashtag: #AlJazeeraCafe.

Customers are lauding the creativity hub where interactive screens are present to serve as their menus. Not only that—the media cafe's swift and friendly staff are as well being commended for a job well done by most coffee-goers.

Don't miss to order their avocado and goats cheese sandwich for a slice of heaven in Doha! The iconic and picturesque pigeon house right in front of the cafe can serve as perfect backdrop for the perfect Instagram shot too!

There's another reason why Doha excursionists can't get enough of the Doha Fire Station apart from its stunning and wide-selection of art houses—the Café #999! Its concept encompasses contemporary café dining in an urban setting and the unique minimalist design that it proudly boasts speaks volumes to the popularity that it's slowly enjoying among the public, especially the millenials.

Meanwhile, 999's dishes are indicative of fresh and raw ingredients, and are homey in appearance and character. The culinary offerings focus on international cuisine with a touch of local influence. Their menu also offers healthy, vegan and organic options.

So what makes it traditional? The truth is, the Fire Station property, where the cafe is beautifully-erected, was originally built for Civil Defense in 1982. They were even one of the very few cafes in Doha to serve camel burgers at one point! How bewildering is that?

The Qataf, which is considered the national flower of Qatar, is the inspiration behind this Arabic-themed cafe. The concept is to combine traditional Arabic hospitality with a contemporary design. Passengers and transitees are praising the little wonder as Qataf's interior contrasts the warm and rich ambiance of a majlis—complete with comfortable Arabic cushions and intricate Moroccan lamps! And although their services and goods are somehow on the pricey side, a sweet tooth just can't resist Qataf's signature coffee and sweets adorned with mezze style platters for sharing and other traditional Arabic dishes with a modern edge such as the classic Moroccan tagine.

The cafe was also among the Top 5 restaurants at the Hamad International Airport article that we've published several months ago. For the complete list, click HERE.

The concept of creating a late 80's cafe in Qatar has long been planned until Tawar Mall opened its doors to the public earlier this year, paving way to the birth of The 80's Cafe. Arabic coffee and other hot beverages including the most sophisticated tea varieties, refreshing smoothies & mocktails are being served by its all-smiles staff. And the shop is not only cozy, the space it's occupying is also quite massive, allowing for more airflow and human activity.

The founders take on such a simple idea to infuse their deep-rooted Qatari culture with the modern concept of civility that clearly reflects their present in a delightful setting.

Tip: If you want to sprinkle your coffee with latte art, just ask the staff and they'll do it with flying colors for you!

The logic behind June Cafe's name is quite amusing... in a patriotic way. The ILQ team was lucky to have a word with its owner and founder and he said that the reason why they chose June as the cafe's name is primarily because there were several note-worthy events that happened in Qatar during the month of June!

We've listed some of these events below and we think that the cafe indeed deserves to be named that way!

Another fun fact is that they opened June 5 of this year—during the exact anniversary date of the now 15-month-old blockade. Not only that. June Cafe also prides itself as a hang-out place rich and overflowing with Qatari culture and the overlooking Doha skyline is a living testament to that.

Don't miss to catch the 5-minute club car ride that will take you from the MIA to the cafe itself! Just park your car at the MIA parking and look for the golf carts! Or call (+974) 4443 2692 for assistance!

Have you been to any of these original concept cafes in Qatar? If yes, what is your favourite? Also, if you happen to know more traditional cafes around Doha that didn't make the cut, let us know in the comments! And don't forget to like and share this article—it keeps us going! 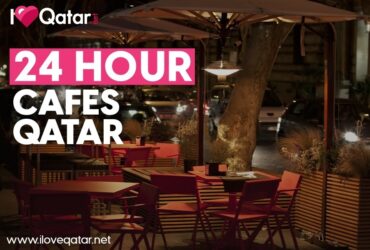