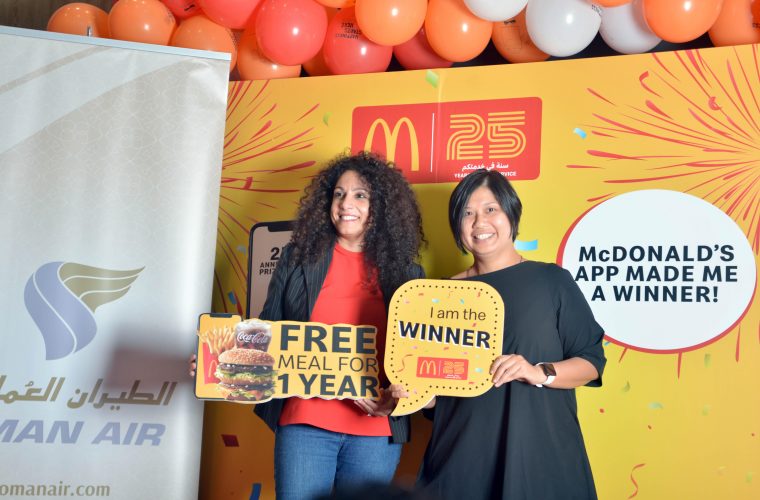 To mark the 25th anniversary of the leading foodservice company in the GCC, McDonald’s Qatar gave away grand prizes to its loyal customers, who are using the McDonald’s App at the anniversary celebration event on October 23rd.

McDonald’s has been home to burger lovers since 1994, and this year, to celebrate the occasion McDonald’s has lined up a string of promotions for its loyal apps patrons.

The campaign ran for 6 weeks with weekly prizes for the winners including electronic gadgets and free meals for a year to 6 lucky winners. The grand prize was a ticket to Oman sponsored by Oman Air and the hotel stay was funded by Ali Bin Ali. The campaign was in line with McDonald’s Qatar’s efforts to give back to their loyal customers and App users.

The McDonald's app has daily special offers for its users that they can redeem at any McDonald’s branches. During the offer period, loyal users who redeemed the offers on the app were automatically entitled to enter into a draw, from which 4 to 5 lucky winners weekly would get different exciting prizes, such as mobile and gaming accessories, T-shirts, footwear, eyewear, toys sponsored by HMV. One lucky winner was selected every week and won the grand prize from McDonald’s for free meals for a year. And one winner was chosen at the end of 6 weeks for the major prize of a holiday to Oman where tickets and hotel stay are included.

“For more than two decades, we are continuously committed to offering delights to the million burger fanatics. McDonald’s apps offers great daily prizes for its users and for this milestone year, we are adding even more value to our loyal customers and app users with our anniversary campaign where lucky winners’ will take-home fabulous prizes from our delighted partners, who are joining us on our grand celebration.”

Zulfiqar Al Zadjali , Country Manager, Qatar of Oman Air congratulated McDonald’s for celebrating 25th years in the GCC, and said, “It is a great delight for us to join McDonald’s at its 25th Anniversary in the GCC. McDonald’s is one of the leading names in the food industry and is a favourite among all people with its wide range of food offerings. This is also a great opportunity for one winner to fly with us and experience Omani culture and hospitality.”